Ladies, Stop Apologizing for Being Girly

Ladies, Stop Apologizing for Being Girly

I’m a bit obsessed with weddings – my wedding, in particular. Of my 2,000+ pins on Pinterest, about 300 of them live in my “Dream Wedding” board, which I’ve labeled “secret”, meaning I’m the only one that can see it. I never thought much of it until I was having lunch the other day with a friend who is getting engaged soon and was talking about her dream wedding. I asked if I could follow her board (I’m a nosy, wedding-obsessed person, what can I say), but she told me it was private.

This got me thinking about the reasons why I decided to make my board private. When I made it, I was in a long-term relationship and I think I was afraid my boyfriend or my girlfriends would see it and think I was pushing for an engagement ring or for more commitment. Then I thought that having a public wedding board that had more pins than any other board would signify to the world that I’m a shallow, anti-feminist who spends all her time picturing herself in fluffy white dresses, or a materialistic princess who wants to blow hundreds of thousands on a dream wedding instead of, say, a down payment on my dream house (for which I have another cluttered Pinterest board). And then there is the idea that, at 21, I’m not supposed to want to get married yet. My parents and relatives always talk about how many people you have to date to find “the one”, as if they’d be disappointed or at best, skeptical, if I decided to marry my first boyfriend or got settled down before I had a steady job or had fully lived my life as a twenty-something single. 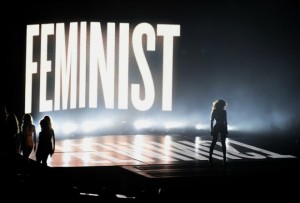 I think the feminist movement is amazing, but if I have one complaint it’s that I worry women and girls who have more traditionally feminine interests or goals are being judged or labeled archaic or as detrimental to the cause of female empowerment. Here’s the thing – I want to get married and have kids and have a beautiful dream wedding that’s a blend of rustic and elegant in a barn in Vermont in October wearing a long-sleeved lace gown. And I also want to earn just as much as a man and be someone’s boss and have all the same rights and opportunities that men do. And I don’t have to pick one or the other or be ashamed to love doing my makeup to Taylor Swift or binge-watching Say Yes to the Dress. Women shouldn’t have to be CEOs or presidential candidates to be taken seriously or seen as models of the feminist movement. Women should have the right to pursue whatever career or path they find most fulfilling, and if that happens to be color-coding a refrigerator calendar with a different marker for each kid’s schedule, then so be it.

If we want to call ourselves feminists, we need to start celebrating the woman who wants to be a stay-at-home mom or professional makeup artist as much as we celebrate the woman who wants to be a biomedical engineer or the next CEO of Microsoft, because being a feminist shouldn’t require you to have a certain job title or work in a traditionally male-dominated field to deserve the label. By telling girls and women that studying fashion merchandising makes them superficial or wanting to be a mom means they have no ambition, we’re just telling women they need to conform to a certain way of life in order to be considered champions of female equality, as if by assuming the role of a ‘50s housewife we’re letting down all the women who fought for equality. But those women fought for the chance to live the lives they wanted without their gender holding them back, and by belittling women with more traditionally female goals and careers, we are just as limiting as the gender inequalities we are fighting to destroy.

As the ever-inspirational Jessica Day so eloquently put it: “I love purses, and that doesn’t mean I’m not a feminist, either. I’m a damn feminist who loves purses. Where else am I supposed to keep my feminist writings? In a purse, that’s where.”