Once upon a time, I lived in a world in which sharks were among the pitiful ranks of spiders and snakes. I never had to hide the fact that I dislike sharks with every ounce of my soul. I hate their beady little eyes and rows of jagged teeth protruding from those huge gums. ‘Jaws’ scared the crap out of me and ‘Deep Blue Sea’ left me watching my back as I stood by pools.

I assumed that everyone else in the world felt the same way as me, and then sometime in high school everyone started to lose their marbles over Shark Week. I couldn’t look at my Facebook or Twitter feeds in August without seeing something about Shark Week. But not me, no sir. I avoided Discovery Channel like the plague and waited for everyone to come back to shark-hating reality once the week had ended.

Yet, this year things have been different for me. Shark Week’s been in my vocabulary since May thanks to Narragansett’s retro ‘Jaws’ can and shark naming contest (look for the winner this Thursday, peeps!) for their adopted shark through the University of Miami’s R.J. Dunlap Marine Conservation Program. I’ve since warmed up to the little buggers and even think they can be kind of cute. I mean, look at him… 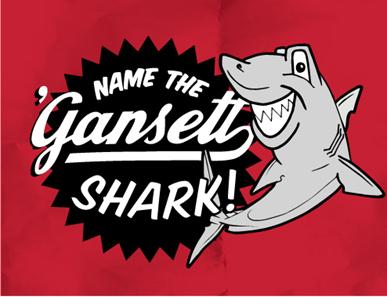 Yes, that may be a cartoon shark but that’s okay. This year, I’m celebrating Shark Week the only way I know how: avoiding the Discovery Channel but drinking copious amounts of beer: ‘Gansett of course.