We’ve all been there. Your dog is staring up at you and – just for a brief moment – you see a flicker of desire to communicate, indicating that if only he could make a noise other than “woof” a whole new world of understanding would be opened to you. It’s the constant frustration and dilemma of being a dog owner: you know that if you could communicate with one another (on a level other than telepathy, obviously) you would be the best of friends and your fate of never going out in favor of staying home to cuddle 24/7 would be cemented.

Luckily for you, Scandinavian designers NSID may have found the answer.  These innovative – and maybe a bit crazy – designers launched an Indiegogo campaign with the goal of raising $10,000 to bring to life what they call “No More Woof.” Based on the simple Raspberry Pi technology, these designers claim that their “No More Woof” doggie headset would “translate animals’ thought into human language.” Now I know what you’re thinking…how is this any different from the telepathic connection I share with my dog that lets me know they approve of me eating Nutella straight from the jar?

Well, with this technology, in theory, your pet could actually tell you “I’m hungry but I want something better than what you’re eating.” The Raspberry Pi headset attaches to your dog’s head and from there detects, analyzes and eventually translates his brainwaves into fully formed thoughts. So far the designers have developed eight prototype voices to fit different breeds, genders and sizes of dogs. While the technology isn’t capable of directly translating your pet’s thoughts into his own voice, short, pre-crafted sentences like “I’m hungry” or “I need to go out” could soon be emanating from Sparky. 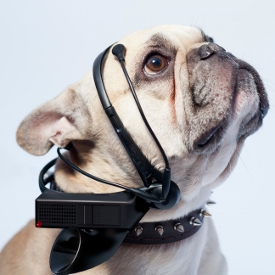 Sound like a must-have? For a $65 contribution to their research, the Scandinavians will provide you with a “sensor-equipped No More Woof (NMW) capable of distinguishing two or three thought patterns – most likely tiredness, hunger and curiosity.” Who knows, with this technology, maybe one day it’ll be dogs who rule the world!