Why I’m Boycotting the Super Bowl

Why I’m Boycotting the Super Bowl

I love watching sports – in person, on TV, on a smartphone, through a window in Penn Station – anywhere. But, honestly, I don’t think I can risk the chronic gastrointestinal disorders that I’m bound to contract if I do. I don’t think you understand me… watching the Super Bowl would be BEYOND painful.

Now, full disclosure: I’m a Patriots fan. It would be easy to read this as the jealous ranting of a fan who roots for a team that was just trounced. Honestly, that’s part of it. I can’t bear to see the Ravens win because they showed so little class that I don’t want to see them win it all.

But what it really comes down to is I don’t want to see Ray Lewis win. I wasn’t there when Ray Lewis may or may not have killed a man in 2000, so it’s hard to pass judgment on that. However, what the man is guilty of is completely contrived acts of overt emotion. After the Ravens’ last regular season game: tears. After the Wild Card round: tears. After the Divisional rounds: tears. After the AFC Championship game (and before it too): tears…

How much can one man cry?!

Which brings me to why I can’t root for the 49ers: Jim Harbough. Here he is absolutely LOSING his mind after a controversial replay review: 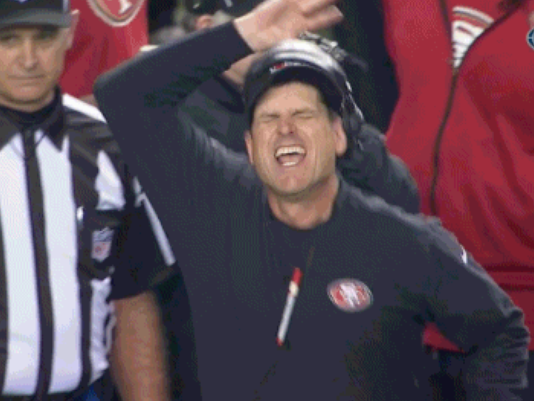 Definitely watch the gif here to see this overreaction in its full glory. And, if you have the time, I would recommend watching it again, in slow motion, here. It’s fantastically epic. Can you imagine being this guy’s kids? I mean, that’s a grown a$$ man!

Which brings me to my last point: the main reason I can’t watch the Super Bowl is because every time someone mentions the fact that the two opposing coaches are brothers and does a close-up on their parents or whatever, the amount of anger that will build up in me will make the Hulk green with envy. The “Harbowl?” More like the Harbleeeeeehhhhhhhhh.