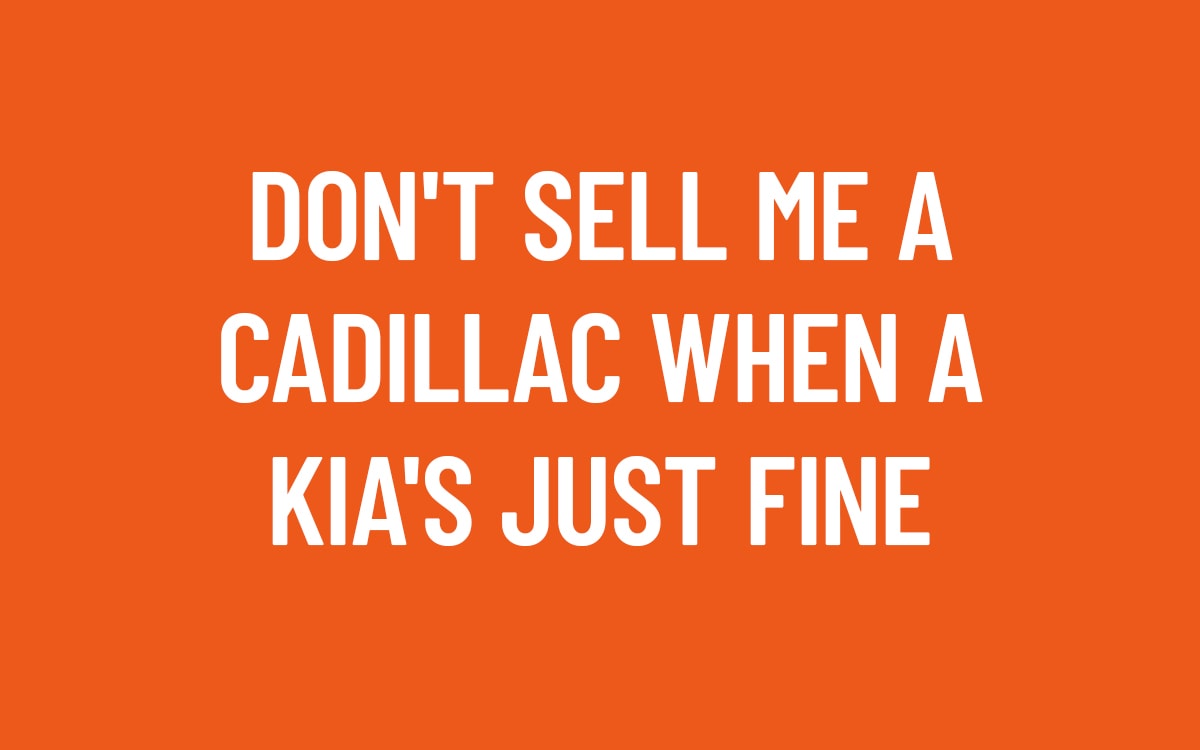 If you’re a follower of the agency, or a regular reader of this blog, you likely already know that we’re straight shooters. We don’t do smoke & mirrors. And we always tell it like it is. We also have this obsession with proving that marketing can be thoughtful, effective and deliver ROI. So it probably won’t be a shock to learn that we’re never the people who are going to sell someone a Cadillac when a Kia will do just fine.

At a conference in Dallas a few years back, I started chatting with some folks from Long Beach, California during the cocktail hour. As inevitably happens, as soon as someone learns I’m in marketing, every bad experience, confusing estimate or general disdain for the industry gets shared (better than what doctors get, I guess. No, please do NOT drop your pants to show me the xx on your xxx!”). In this case, they had completed a rebrand with which they were very happy. They were now contemplating a new website, but weren’t sure they wanted to spend $17K in doing so – the cost of the estimate they had been given by the same folks who had done their rebrand. While we’d only been chatting for a few minutes, I shared with them that, for what I understood their business to be, that price felt high and I offered to review the estimate and give them my opinion. So, after the conference, they sent me the estimate. In all fairness to the agency, it was a fair price for what they were selling, which was a custom developed website. The problem in this case? These people had zero need for a custom website.  Theirs was a pure B2B play, where most of their business leads came from direct sales and not someone just randomly stumbling across their site. All these people needed was a 3-4 page “brochure” website that legitimized who they were online.

I told them as such, and offered them a price that fit that need. I didn’t hear back for a bit, and when I did it was because she was so excited to tell me that she had been at her daughter’s place one afternoon, where she watched in amazement as her daughter built a website for her upcoming wedding with one of the online tools. Apparently she had never seen a Wix commercial before! She went home, signed up and, for less than $100, built her own site. Do I feel badly for not suggesting that in the first place? Not really. Wix and its spawn are common knowledge – I assume everyone knows of those solutions and if they come to an agency, they’re looking for professional input. But in this case I was delighted – taking matters into their own hands, they found a tremendous solution that was exactly what they needed.

They’re forever grateful to me for saving them $17K, and for my straightforward advice. We’ve since stayed in touch, broken bread in Boston and Chicago during trade shows and developed a nice friendship. And I am confident, should they ever find themselves in need of marketing services, I’m going to be the first one they call. All because they now know I would never sell someone a Cadillac when a Kia would do just fine.