Law vs Marketing: The Battle of the Scum 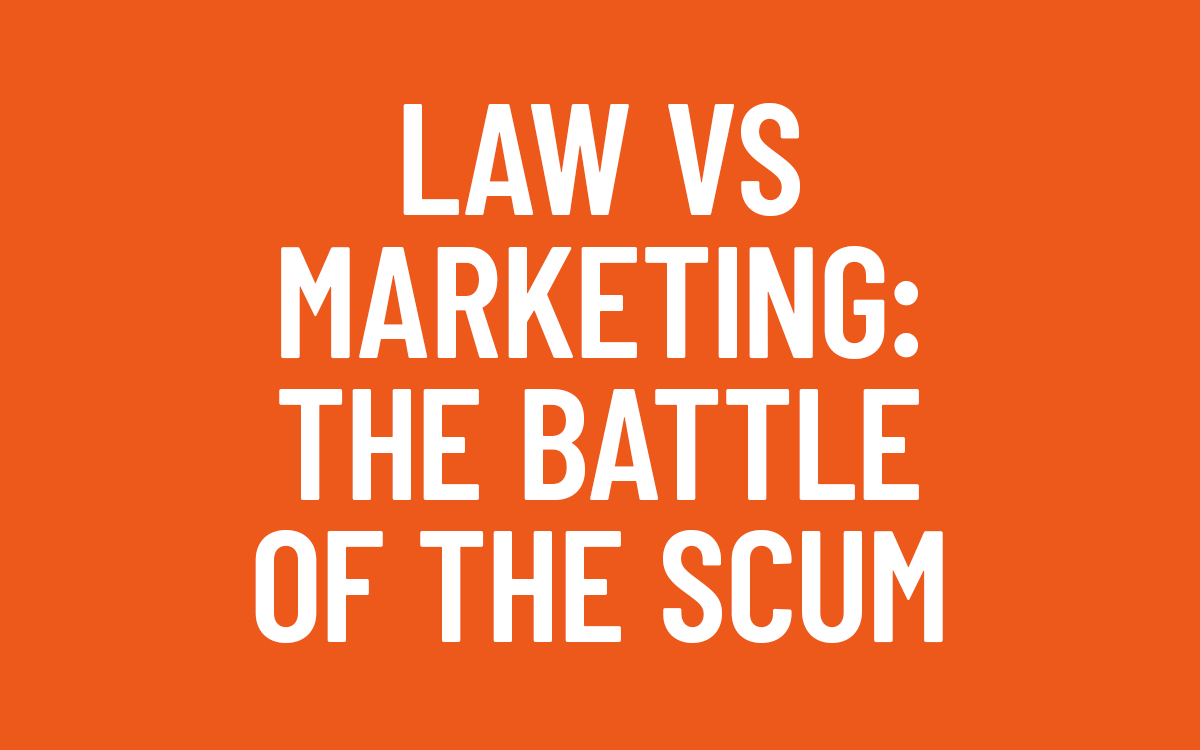 Law vs Marketing: The Battle of the Scum

Unless you’ve been living under a rock (or just ignore social media like the plague!) you likely know that 2019 is marlo marketing’s 15th year in business.

Because of this milestone anniversary, I’ve found myself telling the story of our humble beginnings more than usual over these past few months. One of the things people generally find most interesting about our start is how I made the switch from law to marketing. The answer isn’t all that exciting (I didn’t know what I wanted to do in law, a friend saw an ad specifically targeting lawyers for a PR firm and encouraged me to apply. It’s helpful to have people in your life who see traits in you that you are too clueless to see or don’t yet understand; keep those people around! Anyway, I applied and got the job out of 500 applicants and I figured that if 499 other lawyers were so miserable practicing law, why even bother…and so I took the job. Four and a half years later, I started marlo marketing).

When I made that decision to leave (read: not ever actually practice) law after receiving my JD and passing the MA & NY state bar exams to accept that first job in PR, I really had no idea what I was getting into. Up ‘til that point, I had never even heard of PR as a career, had never taken a class, or known anyone in the industry. But, I figured, at the very least, people wouldn’t think I was legal scum (the typical response when you tell someone you’re a lawyer is “oh, great, like we need another one.”). Little did I know that PR and marketing people are held in even lower esteem! At least lawyers have a barrier to entry — go to school, pass an exam. But if I had a dime for every time someone said to me “OMG, I LOVE to go to parties and talk to people, I could totally do PR – will you hire me?!” I’d be rich and traveling the world…or working on my tennis serve. If only it were that simple.

That story is one I tell in new biz mtgs. I tell it over a glass of wine at cocktail parties. I tell it when I speak on panels. I tell it to strangers on airplanes. And I’ve told it A LOT during this, our anniversary year. I don’t tell it because I need to hear it for the bazillionth time; I typically tell it after someone asks what I do for a living and then proceeds to tell me stories about negative past experiences they’ve had in any and all realms of marketing. Unfortunately, that happens WAY more often than it should.

See, calling oneself a “marketing consultant” is easy. Actually being a marketing consultant is a different story entirely. And that’s the one big difference between marketing and my almost-career in law. It’s not easy to call yourself a lawyer, so unless you actually are most people would never think to claim to be one. But set up a lemonade stand as a kid and that resulting “marketing experience” ends up on a resume 10 years later as the primary qualification as to why I should hire you (true story).

So the moral of this story: just because someone says they’re in marketing doesn’t mean they have any right to do so. Be careful where you spend your dollars. Do your due diligence. And check references. Because I’d really love nothing more than to stop having to tell this story!